Jack in the Box Hits Home Run in Angels Stadium 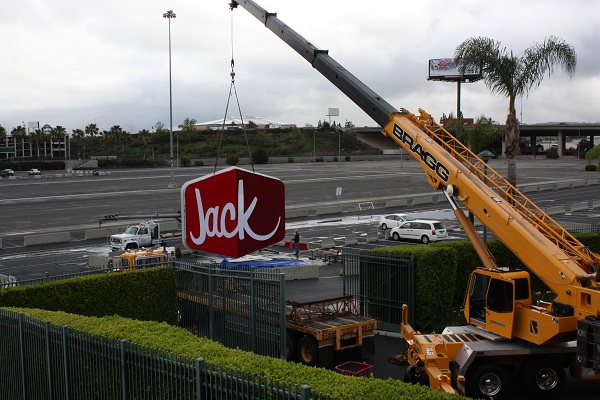 Baseball fans in Anaheim have options beyond hot dogs this season. Jack in the Box, a major supporter of Los Angeles Angels of Anaheim baseball and one of the nation’s leading hamburger chains, has opened three new locations inside the stadium.

The new restaurants, one each along the 1st and 3rd base concourses, and a larger one in the outfield behind section 255, mark the first Jack in the Box locations located inside a sports venue.

It’s going to take quite a drive from Angels hitters to reach the 23 ft. wide by 20 ft. tall Jack in the Box sign in the outfield. But as the only illuminated sign in the outfield it will be easy for them to spot. However, even a big hit is unlikely to damage the sign which was produced and installed in record time by CNP Signs & Graphics in San Diego, CA. Because of the high-profile location of the sign, City of Anaheim planners were very particular about the placement and strength of the sign structure.

Coordinating with multiple stakeholders, complicated engineering requirements, and the extremely short time frame combined to make this a challenging project. The time frame was so short, in fact, final approval for the construction of the sign came only 8 days before it needed to be loaded onto a truck and driven to the stadium.

Angels Stadium has the 5th highest attendance in all of Major League Baseball, with over three million people watching from inside the stadium last season. Because of the location and the number of fans in the vicinity during games, city planners required extensive modification and safety engineering. Compared with all the coordination and permitting, the actual building of the sign and lifting it over the outfield wall with a 90 ton, 220 ft. boom crane was a snap.

Tight schedules are an everyday occurrence for sign builders. But this kind of deadline raised some eyebrows around the CNP Signs & Graphics shop. In the end, the razor-thin engineering tolerances and fabrication came together with quick efficiency on the shop floor. When the big sign was finally lifted over the stadium wall and set into place on the reinforced steel beams, it was a perfect fit.

CNP Signs & Graphics worked with Jack in the Box and Angels stadium representatives every step of the way to make sure the signs, menu boards, and additional lighting were delivered and installed on time and done right the first time. With the incredibly tight schedule, there was no room for second chances. Luckily, the folks at CNP hit the first pitch out of the park. 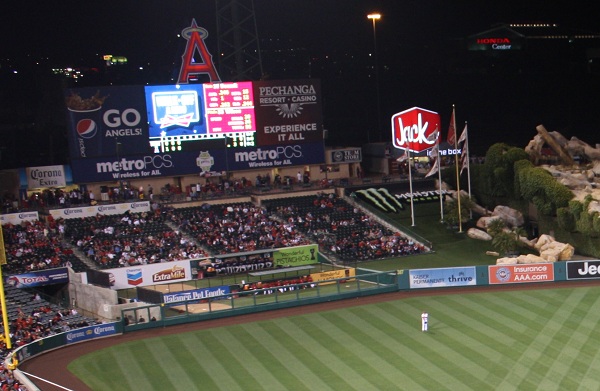