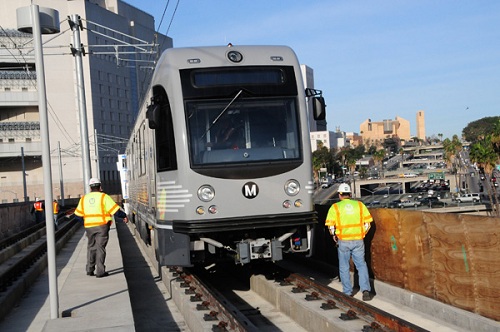 The Metro Blue Line runs from Downtown LA to Downtown Long Beach. It’s one of the most popular light rail trains in the nation. Recent expansion of the line has added nine new stations (with more expansion to follow), complete with new track, bright new trains and new directional signage. These new stations, like many of the stations opened since 1990 (including stations on both the Green Line and the Red Line) are simple to navigate thanks to the wayfinding and informational signage manufactured by CNP Signs & Graphics.

The Blue Line is the second largest light rail line in the United States, with an average weekday ridership of over 80,000. The nine new stops on the line (that runs from Pico and Exposition to La Cienega and Jefferson Boulevard) are being fit with 775 new signs with easy-to-read white reflective vinyl against primary color backgrounds in black, red, and yellow.

The signs are painted 1/8” aluminum, non-illuminated panels coated with a high-tech anti-graffiti paint that will aid in keeping the new stations clean.

Working in the light rail environment has required CNP workers to learn a new language: hand signals. All workers on the line take safety classes from the Metro Authority. Workers learn how to communicate with each other, as well as the train operators, while working in close proximity to the moving trains.